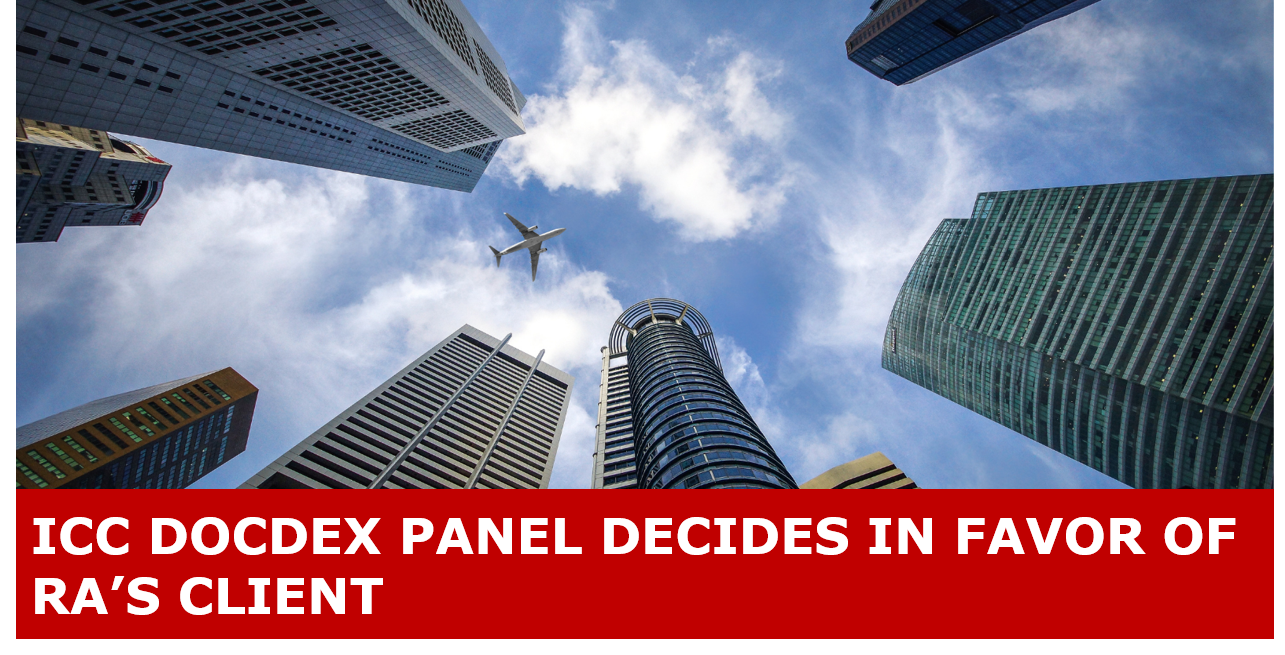 The International Chamber of Commerce (ICC) DOCDEX panel has decided in favor of RA’s client, by deeming an Issuing Bank liable to honor a documentary credit of approximately USD 26,000,000 plus interest.

Details of the dispute:

The dispute mainly revolved around the Issuing Bank’s handling of discrepant presentations; specifically, the SWIFT message type and format of the advice of refusal, and the handling of the presentations (the documents) after the notices of refusal were sent. They key points include:

When sending their advice of refusal, the Issuing Bank used SWIFT MT999, instead of the message type designed for the purpose; namely MT-734 and added the phrase “PLEASE CONSIDER THIS MESSAGE AS MT734″.

UCP 600 requires that notice to be given by telecommunication, or if that is not possible, by any other expeditious means. Accordingly, there is nothing preventing the Issuing Bank from using MT999 to send their advice of refusal. However, since MT999 is a free text message type, using it (instead of MT734 which is designed for the purpose) requires the Issuing Bank to manually ensure that all information required to confirm with UCP 600 Art. 16 is entered, which was not the case in this dispute.

The narrative/text of the SWIFT MT999 messages sent by the Issuing Bank did not conform with nor meet the requirements stated in Art. UCP 600 16 (c). Accordingly, it was decided that the messages do not constitute advice of refusal, and consequently the Issuing Bank was precluded from claiming that the presentations were discrepant.

The ICC DOCDEX panel applied the same reasoning of the International Chamber of Commerce’s Expert’s Opinion in TA.892rev.

II. Not making the discrepant presentations (documents) available to the presenter.

Following the rejection of the presentations (documents), and despite the Issuing Bank stating that ‘WE HOLD THE DOCUMENTS AT YOUR DISPOSAL IN OUR COUNTERS’, the bank took on a different course of action.

Notwithstanding the multiple requests and communications, the Issuing Bank was unresponsive and failed to indicate the status of the documents and their [I.e., the Issuing Bank’s] ability to return them in a timely manner in the same condition as presented. This conduct provides additional grounds to preclude the Issuing Bank from refusing to honor.

A note from RA:

RA welcomes the panel’s decision, as it highlights the critical importance of accurate and careful implementation of UCP 600 when working with Documentary Credits.

In Brief As a result of the repercussions of the COVID-19 pandemic, the United Arab...

Provided by CountryRisk.io The United Arab Emirates’ macroeconomic condition has markedly deteriorated in the wake...