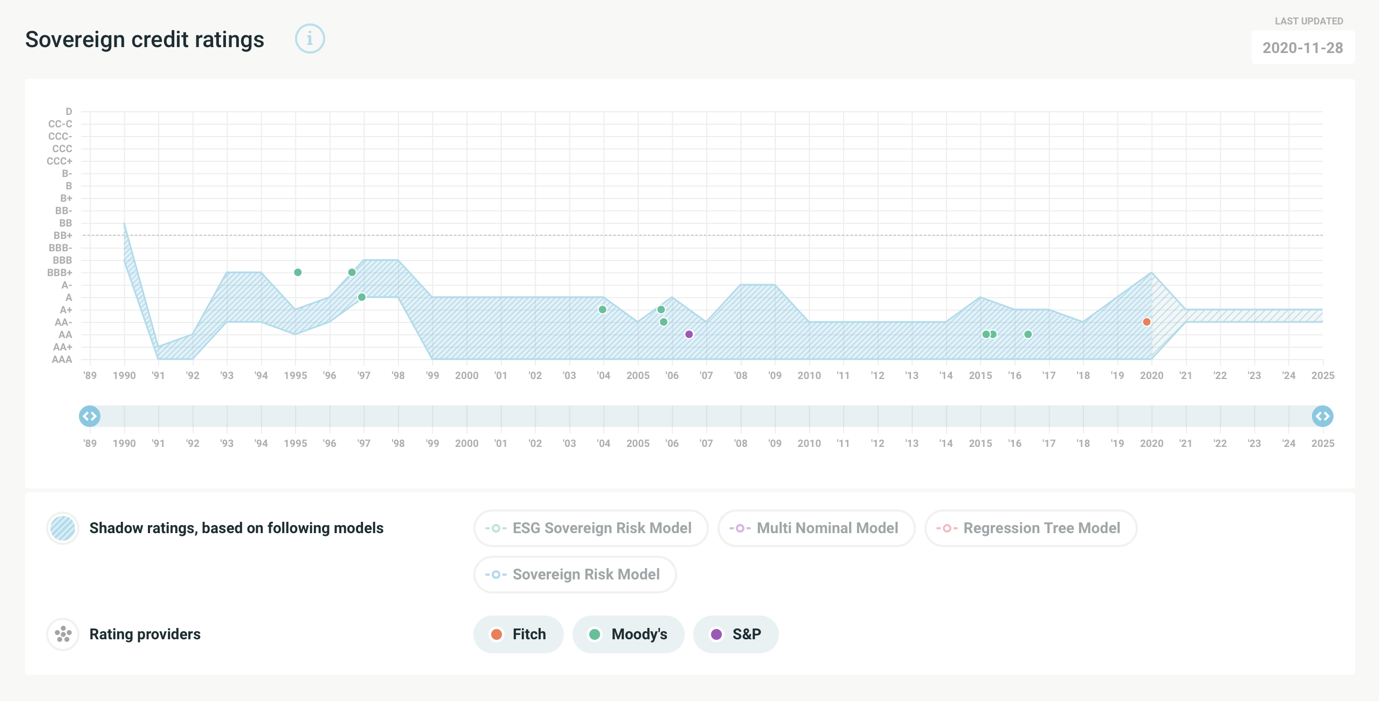 The United Arab Emirates’ macroeconomic condition has markedly deteriorated in the wake of the global pandemic, stemming from an already fragile backdrop. The IMF expects the economy in the UAE to contract by 6.6% yoy in 2020 after growing 1.7% in 2019, owing to lower world oil prices, substantial cuts in oil production, supply chain disruption and lower tourism levels, to name a few. Moreover, the government’s consolidated deficit is expected to widen to 10% of  GDP from just below 1% in 2019 due to authorities’ wide-ranging efforts to support the economy – with the attendant rise in public sector debt to just below 40% of  GDP. While this may be substantially lower when compared to its regional peers, it illustrates a steady increase in trend levels since 2018, and is nearly twice as much as the average of around 20% of GDP during the previous five years, i.e., since 2013.

The economy is projected to rebound by around 1.35% in 2021 (based on IMF forecast, World Economic Outlook October 2020) – below the pre-crisis level – reflecting uncertainties over the global economic recovery and associated impact to the UAE’s hydrocarbon and non-hydrocarbon economy. A lacklustre growth, when combined with just a gradual narrowing in the public deficit and steady debt levels at around 38% of GDP in the coming years is expected to weigh on the country’s credit quality. However, this is mitigated by its strong external metrics such as its large current account surplus, positive net external debt and strong net international investment position.

With investors placing more and more weight on environmental, social and governance factors, the UAE’s efforts to address its commitments to meet the SDG goals by 2030 are remarkable and ambitious. Challenges abound due to the UAE’s high exposure to climate change transition risks in de-carbonizing the economy, hence the implementation remains to be seen.

The Shadow Credit Rating employs a combination of several fundamentals-based sovereign credit models which are designed to give an early indication of upward or downward pressure on rating trends.

The shaded area of the chart above shows the range derived from various econometric and machine learning models that explain the average agency rating (i.e. S&P, Moody’s, Fitch) with a wide range of economic, financial and governance variables. The increase at the current end of the chart is the impact of the COVID-19 crisis on sovereign risk variables. Overall, the shadow rating of the UAE suggests that based purely on fundamentals and compared to other sovereigns, the international rating agencies have assigned ratings that are right at the average of the shadow rating range. The shadow rating puts some weight on governance indicators where the country scores relatively lower (e.g. voice and accountability and political stability), as well as on several economic structures, such as the UAE’s still relatively limited economic diversification and related higher business cycle volatility. That being said, the country’s net external creditor position is a key strength of the credit profile.

The UAE is currently rated Aa2, AA- and AA by Moody’s, Fitch and S&P, respectively, all with stable outlook. The quant models would suggest that there is downside pressure on the rating.

A comprehensive assessment framework and statistical data for 190 countries is available on the CountryRisk.io Insights platform freely accessible here: www.countryrisk.io

The International Chamber of Commerce (ICC) DOCDEX panel has ruled in favor of RA’s client,...

In Brief As a result of the repercussions of the COVID-19 pandemic, the United Arab...